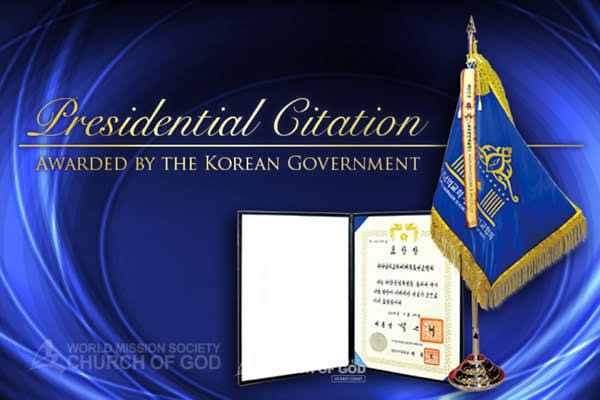 On May 29, 2015, the World Mission Society Church of God was presented with the Presidential Citation, the highest honor awarded by the South Korean government to the most outstanding organizations making a positive contribution to society. This award is given to a group or an organization that has continuously provided great acts of service in a certain field for more than five years. The Church of God received the award for its devotional volunteer services, namely marine environmental protection and marine disaster relief carried out across South Korea.

The World Mission Society Church of God has been at the forefront of relief and recovery efforts throughout various disaster-stricken areas in Korea: cleaning up the oil spill around Taean (a large-scale national disaster), serving free meals at the oil spill area in Yeousu, as well as typhoon disaster relief efforts in Goseong, Gyongna Province and Wando and Jundo in Jeonnam Province. In the midst of the Sewol ferry disaster in 2014, which anguished the nation and the global community, the Church of God in Jeonnam Province provided victims with free meals for 44 days, devoting 700 man-days to grieve with its fellow citizens.

Kim Young-Suk, Vice Minister of the Ministry of Oceans and Fisheries, delivered the award certificate and the Presidential Citation banner to the Church of God at the award ceremony held at the Sejon Central Government Complex on June 8, 2015. The World Mission Society Church of God is the only religious organization to ever win the award.

The Korean Presidential Citation Award and Its Significance

In South Korea, the Presidential Citation is of greater value than any other merit because recipients are determined after undergoing a meticulous background check. Beginning with a stringent candidate selection process and a lengthy achievement analysis, each candidate must undergo a rigorous review before being granted the award. This process is especially difficult for a religious organization to complete successfully.

Step Two: The Church of God underwent a background check. A thorough investigation was conducted to ensure there was no trace of the Church evoking criticism in society or having been involved in criminal activity. After confirming the Church of God has no criminal history, the Church moved on to the third step in the process.

Step Three: The Ministry of Oceans and Fisheries screened the Church of God at the Public Committee meeting. This meeting included civilians and public officials—with more than half being of different religious backgrounds, including some who disagree with the beliefs of the Church of God. Yet none of the committee members were able to argue against the volunteer efforts of the Church.

Step Four: When the screening by the Ministry of Oceans and Fisheries concluded, the Ministry of Government Administration and Home Affairs also screened the Church of God. And they too concluded that the World Mission Society Church of God is deserving of the Presidential Citation for its dedication to South Korea and its people.

Step Five: The President’s Cabinet conducted the final screening. Here, all the members of the Cabinet agreed that the works of the Church of God are deserving of the Presidential Citation.

Step Six: Once all of the screening and reviews were completed, the President of South Korea received the necessary clearance to present the World Mission Society Church of God with the Presidential Group Citation.

While presenting the award, Vice Minister Kim commended the Church of God for its hard work and efforts:

“The Church of God has become a spiritual anchor in the field of pain. You’ve shown a message of love to all people with your devotional efforts, and it is right to award you the Presidential Citation. We appreciate your hard work.”

He went on to speak more about the Church of God and how he was moved by its volunteer services in the aftermath of the Sewol Ferry tragedy:

“Not to speak of the free meals you provided to many people without any complaint despite a long period of time, your smile and concerns towards the victims must have become a great consolation. We hope that you will lead Korea well with such a mindset. We will remember your love and devotion forever.”

“So far, our Church members all across the country have helped our neighbors and society with one mind despite their busy daily lives. All this could be possible because, at the center of all our activities, there were the teachings of God who has shown us the examples of giving love and serving others. We will continue to give our helping hand to the best of our ability with the mind of a mother who takes care of her family with love.”